After the death of Qutubuddin Aibak, the first sultan of the Das or Slave dynasty in 1210 AD, the Maliks and Sardars in Lahore installed a person named Aramshah to maintain peace among the people and prevent possible rebellions. There are differences of opinion as to what was the relationship between Aramshah and Qutubuddin. The people of Delhi refused to accept this weak and incompetent ruler and an atmosphere of planetary war was created in the country. In such a situation, invitation was sent to Iltutmish, the Subedar of Badaun and son-in-law of Qutubuddin Aibak, to handle the situation in Delhi. Iltutmish, accepting the invitation, left for Delhi and defeated Aramshah in place of “JUD” and put him to death and became the third Sultan of Delhi. Today in this blog we will discuss the life and achievements of this Iltutmish. 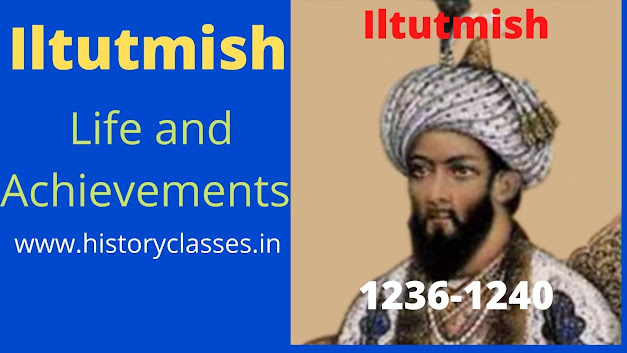 Iltutmish (Shamsuddin Iltutmish) was a slave and was the most eligible Sultan among the sultans of the Das dynasty. We have no proof about when he was born. But Iltutmish was born in Turkistan. He was born in a high family. He belonged to the Turkish Ilbari community. He was very handsome and of sharp intellect in his childhood. Her other brothers were jealous of her beauty and her intelligence and tried to deprive her of her paternal residence and patronage. His brothers sold it to a merchant from Bukhara who sold it to another person from where Qutubuddin Aibak bought it. Seeing his military qualities and leadership ability, Qutbuddin Aibak appointed him as the province president of Badaun.

Where did Iltutmish live?

Iltutmish was a resident of Turkistan who was sold by a person to Qutubuddin Aibak.

Who was the wife of Iltutmish

Seeing the talent of Iltutmish, Qutbuddin Aibak married Honi’s daughter to Iltutmish. Shah Turkan had another wife who was the mother of Ruknuddin Firozshah, a Turkish maidservant.

Qutbuddin Aibak appointed Iltutmish as the Subedar of the ‘Akta’ (Jagir) of Badaun. At that time, Badaun was the highest in the Delhi Empire.

When did Iltutmish get Freedom from Slavery?

Muhammad Ghori was greatly impressed by Iltutmish with his commendable services and Ghori freed him from slavery by an order. Thus he was not a slave at the time of becoming the Sultan.

Iltutmish as the Sultan of Delhi

Iltutmish’s becoming the ruler was challenged by a general of Qutubuddin but he failed. Some Islamic jurists led by Qazi Wajih-ud-din opposed him on the ground that he was a slave and a slave could not become a sultan. These people calmed down only when Iltutmish showed them his slavery emancipation.

It is alleged that Iltutmish was not the real heir of the Delhi Sultanate and had abducted it. But this allegation cannot be agreed as there was no such thing as kidnapping. He was invited by the Sardars of Delhi himself. He had gained power by conquest and was also recognized by the Caliph of Baghdad.
The Caliph of Baghdag conferred on Iltutmish the title of Sultan-e-Azam (Great Ruler). On his coins, Iltutmish depicted himself as the messenger of the Caliph.

When Iltutmish became the Sultan in 1211 AD, there were many challenges in front of him. But he bravely faced those difficulties and challenges and overcame them. He immediately took drastic measures against the Qutbi and Muizzi Maliks and inflicted oppressive defeat on them near Delhi. Consolidated his position in Delhi and its surrounding areas. He also obtained the ‘Mukti Patra’ from Yalduj.

Tajuddin Yalduj became the ruler of Ghazni after Muhammad Ghori, he considered the Delhi Sultanate to be a part of Ghazni Empire. That was the biggest challenge for Iltutmish. Yalduz captured Lahore in 1214 AD. The situation was intolerable for Iltutmish. Yalduj also captured Punjab and Thaneshwar. Iltutmish reached the plain of Tarain (1215-1216 AD) to teach Yalduz and defeated Yalduz badly. Yaldoz was captured in an injured condition and taken to Badaun where he was murdered. In this way Iltutmish got freedom from his biggest enemy.

Nasiruddin Qubacha was the provincial head of ‘Uch’ and ‘Multan’. After the death of Qutbuddin Aibak, Qubacha declared himself independent and also took control of the Punjab part. To punish the rebellious Qubacha, Iltutmish expelled him from the Punjab in 1217 AD. But in the next he tried to be independent again. In 1227 AD Iltutmish marched against Qubacha and took control of ‘Uch’. Kubacha fled and took refuge in ‘Bhakkar’ but in the end he committed suicide.Iltutmish captured Bhakkar and appointed Vazir Muhammad Junaid for the conquest of Sindh.

After the death of Qutbuddin, Ali Mardan assumed the title of Alauddin, establishing independent power in Bengal. After his death, his son Hisamuddin Ibaz Ghiyasuddin ascended the throne with the title of Azim and issued coins in his name. He also read the Khutba of his name. This was an intolerable situation for Iltutmish, so in 1225 a campaign was sent against him and Ghiyasuddin himself led him immediately accepted the submission of Iltutmish and agreed to pay the tax. But after some time he rebelled again, this time he was defeated by Iltutmish and put to death and took Bengal under the direct control of Delhi Sultanate.

After the death of Qutbuddin Aibak, most of the Rajputs had established their independent power and expelled the Muslim armies from their kingdoms. Iltutmish could not bear the independence of Rajputs for long so he sent his forces to control Rajputs.
* First of all, Ranthambore was conquered in 1226 AD.
After that, the siege of Jailor was laid. The ruler Udai Singh protested there but in the end, he surrendered and was allowed to continue as the ruler on the condition of paying taxes.
Biana, Tanger, Ajmer, and Jodhpur were also captured.
* In 1231 AD, the ruler of Gwalior defeated Malaya Vammardev and returned the kingdom only after paying taxes.
The ruler of Kalinjar, Trilokyavarma gave up his kingdom, due to which looting started in the state. But the Chandelas drove the Muslim armies out of the state.
Iltutmish himself led the invasion of Nagad, but there the ruler Kshetra Singh defeated him, due to which Iltutmish had to suffer a lot.
Iltutmish also failed to defeat the Chalukyas of Gujarat.
* In 1234-35 Iltutmish attacked Malwa. He plundered in Bhelsa and Ujjain. Destroyed the famous Mahakal temple of Ujjain.

Many districts of present-day Uttar Pradesh – Kannauj, Banaras, Katehar (Rohilkhand), Bahraich, and Awadh, etc. had established independent power after the death of Qutubuddin Aibak. But Iltutmish brought all the districts of the Doab under the Delhi Sultanate.

The Mongols were a very cruel and terrible people. Iltutmish had to face the Mangol problem during his reign. For the first time in 1221 AD, the Mongols under the leadership of their dreaded leader Genghis Khan appeared on the banks of the Sindh River. When Genghis Khan attacked Jalaluddin Mangbarni, the last ruler of Khwajam, he fled to Punjab and sought refuge in Iltutmish. Sensing the crisis, Iltutmish sent a written decree to Jaluddin that there was no objection in sheltering him but the climate of Punjab would not prove suitable to him. Jalaluddin made a treaty with the Khokars, he defeated Nasiruddin Qubacha of Multan and returned back after plundering. The Mongols also returned. Thus the small Muslim kingdom of India was saved.

How did Iltutmish die?

Iltutmish’s last campaign was against Bamiyan. This region was located just west of the mountainous region or the Salt Range of the Sindh-Sagar Doab. On the way, Iltutmish was struck by a very high fever that he had to come back to Delhi. Eventually, the fever proved so fatal that Iltutmish died on 30 April 1236.

* In 1231-32 AD, the construction work of Qutub Minar was completed.
Qutub Minar is named after Khwaja Qutubuddin who came to India for residence.
* Iltutmish had arranged a bell and chain in his court so that the seeker of justice could easily reach the Sultan in times of difficulty.
* In the Sultanate period, the person seeking justice had to wear red clothes.
* Iltutmish got the construction work of a school done in Delhi.
* Roads were built and forests cleared.
Iltutmish is also credited with possibly getting the first tomb built in India.
* Iltutmish got the Jama Masjid of Badaun and the gate of Atarkin constructed in Nagaur. ‘
The mosque of Ajmer was built by Iltutmish.
* Iltutmish’s tomb is located in Delhi, which is an orbital tomb.

Iltutmish formed a group of 40 powerful slave Turks in his court, which was known as Turk-i-Chalgani. 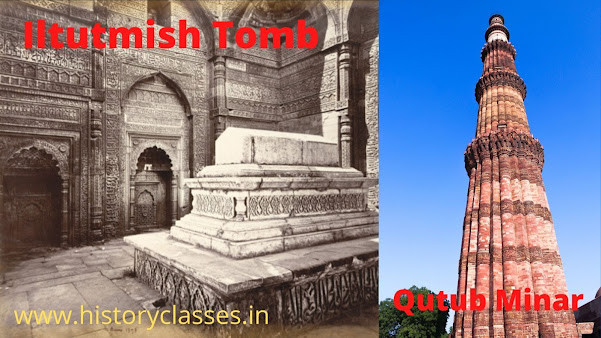 Iltutmish shifted his capital from Lahore to Delhi. After that, all the Sultans kept Delhi as their capital.

Iltutmish was the first Sultan to issue coins in pure Arabic script.
Iltutmish accepted the silver ‘Tanka’ (Rupee Ancestor) as his standard coin, whose weight was equal to 175 grains.
Made ‘Jital’ of ‘copper’.
Iltutmish started the tradition of getting the mint’s name inscribed on the coins.
On coins, Iltutmish mentions himself as the representative of the Caliph.
After the Gwalior conquest, Iltutmish got some proud words inscribed on his coins, such as “the mighty sultan”, “the sun of empire and religion”, “the assistant of the hero of the devout”.
Iltutmish introduced the ‘Iqta system’.

Iltutmish had three sons and one daughter. He had four children, Nasiruddin Mahmud, Ruknuddin Firoz, Razia Sultan and Muddin Bahram.

All his sons were luxuriant and unworthy due to which he declared Razia Sultan as his successor.But after the death of Iltutmish, the noble chieftains rejected Razia’s succession and placed Ruknuddin Firoz Shah on the throne.

Iltutmish’s assessment
Sir Woolsley Hague has ranked Iltutmish as the best among the slave sultans. He organized and expanded the empire he received from his master. Established the empire and provided stability. He was cruel to Hindus.
Minhaj-us-Siraj praised him as a wise, kind, virtuous and religious man. Minhaj-us-Siraj composed Tabat-i-Nasiri. Many other scholars lived in his court.