Who was Father Stan Swamy?

Stan Swamy, who described himself as a human rights activist from Namkum, Ranchi, has passed away. Stan Swamy, 84, died during treatment in Mumbai. He was lodged in a Mumbai jail in the Bhima Koregaon case. He is also accused of conspiring to assassinate Prime Minister Narendra Modi. In the Bhima Koregaon case, NIA ie National Investigation Agency had questioned him from his Namkum residence. Many items were recovered during this period. After this he was arrested by the NIA and taken to Mumbai. Since then he was lodged in a jail in Mumbai. 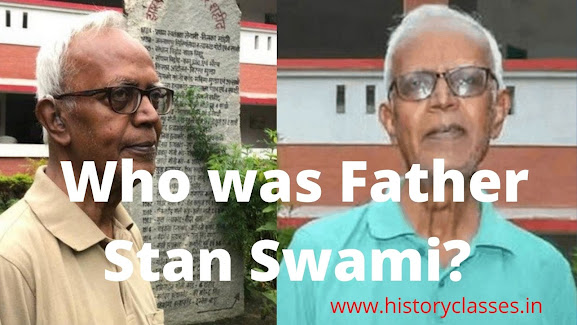 Who Was Father Stan Swamy?

Father Stan, originally from Kerala, has been the voice of the tribals of Jharkhand for the last half a century. Especially with regard to the questions of their displacement and resettlement. Jharkhand has 40 percent of the country’s total mineral resources, while about 39 percent of the state’s population lives below the poverty line. Obviously, there is dissatisfaction among the people. Meanwhile, governments have adopted the policy of giving land in mineral resource areas to various corporate companies, which has intensified conflict between tribals and the government. Naturally, Father Stena Swamy has been vocal in favor of the tribals and against the government.

Father Stan Swamy was associated with the Jharkhand Organization Against Uranium Radiation (JOAR), which had launched a successful movement against the Uranium Corporation in 1996, after which the construction of a dam in Chaibasa was stopped due to which thousands of tribal families could have been destroyed. Later he started working among the tribals of Bokaro, Santhal Parganas and Koderma district.

In 2010, Father Stan Swamy’s book came out – “The Truth of Prisoners”. In this book, he proved how tribal youth were imprisoned on false charges of being Naxalites. Of these, 97 percent of the youth belonged to families whose income was less than five thousand rupees per month, that is, the family could not even fight a legal battle for them. In 2014, another report of his came out in which it was said that in 98 percent of the three thousand arrests, the accused did not have any connection with the Naxal movement. Yet these young men kept rotting in jail. Father Stan Swamy made constant efforts to get such undertrial prisoners out of jail. From giving bail to trying for legal help, and kept climbing in the eyes of the government.

Father Stan Swamy continued to raise questions as to why the government was not implementing the Fifth Schedule of the Constitution, which directs the formation of Tribal Advisory Councils (TACs) in tribal areas. All the members of this council must be tribal. This council will act as an advisor to the governor for the development of tribals. But all the governments have come and gone, this has not been implemented. Neither the Governor showed interest in implementing this constitutional provision.

Apart from this, Father Stan Swamy has also been raising the question of bypassing the PESA (Panchayat Extension to Scheduled Areas Act) made in 1996. This is the law under which tribal communities were given the right of self-government through Gram Sabha for the first time. By making an issue of this law, ‘Pathalgarhi movement’ started in Jharkhand from 2017. Under this movement, a big stone has been erected outside all the villages of Jharkhand, on which the Preamble of the Indian Constitution and the constitutional rights of the tribals are inscribed. The irony is that the BJP government of Jharkhand took action under the sedition law against all the leaders associated with this movement for burying the inscription of the Constitution. Father Stan Swamy also became a victim of this. The sedition case was withdrawn only after the change of government in 2019.

Father Stan Swamy is the founder of the ‘anti-displacement mass development movement’. They constantly raise questions about the non-implementation of the Forest Rights Act (FRA) made in 2006 and the land acquisition law being anti-tribal. They say that the governments are attacking the land of tribal areas to loot the resources.

Father Stan Swamy has said that his harassment has nothing to do with the Bhima Koregaon case. In fact, the government wants to show every person standing against the loot of water, forest and land by connecting them with the Naxalites so that the entire movement can be suppressed. Whereas the fight is happening only to implement the constitutional provisions.

It remains to be seen what evidence the NIA offers to substantiate the charges leveled against Father Stan Swamy. But from Father’s point of view, it is a fight against power-funded corporate plunder that will hardly stop with such arrests.

Why was NIA Arrested To Father Stan Swamy

The National Investigation Agency (NIA) arrested Father Stan Swamy, a renowned human rights activist from Jharkhand, from his Ranchi office on the late night of 8 October. Father Stan Swamy, 83, was accused of inciting violence in Bhima Koregaon. All the sections including UAPA were imposed against him.

The East India Company, with the help of the Mahar community, defeated the Peshwa’s army on 1 January 1818 at Bhima Koregaon near Pune. Describing it as a symbol of valor of Dalits, a festival is held every year. On January 1, 2018, on its two hundredth anniversary, celebrations were also held here, after which violence broke out. Police said that Maoist organizations were behind this. Many intellectuals and activists were arrested in this connection, who had the opposite allegation that the then BJP government and people associated with the RSS had committed this violence because they did not tolerate the Dalits raising their heads like this.

By the way, Father Stan Swamy had never been to Bhima Koregaon and in 2018 the Bombay High Court had also held that the accused were not mere ‘suspects’ but it did not make any difference to the police. She was trying to prove that the father had links with the Maoists who instigated the violence in Bhima Koregaon. He was questioned for 15 hours between July 25 and August 6, 2020.

The father had issued a statement on October 6 saying that he was presented with several documents allegedly seized from his computer which attest to the relationship between him and the Maoists, but these documents were forged. Investigating agencies put these in their computers and then made evidence. The father had said that the NIA wanted to take him to Mumbai, which was not good considering his physical condition. Anyway, in view of Corona, the Jharkhand government has stopped people above 65 years of age from going to public places, they will answer every question through video conferencing. But none of his arguments were accepted and he was arrested on the night of 8 October

84-year-old tribal rights activist Stan Swamy, arrested in the Elgar Parishad case, was in critical condition for several days and was on life support system. His close friends have accused Taloja Jail that Swamy’s condition had worsened due to non-availability of health facilities.
Tribal rights activist Father Stan Swamy, 84, died more than a month after being infected with the coronavirus. His condition was deteriorating continuously for the last few days. He was being treated at a private hospital (Holy Family Hospital) in Mumbai on the instructions of the Bombay High Court. The court on May 28 ordered the hospitalization of Swamy, who was lodged in Navi Mumbai’s Taloja Jail in the Elgar Parishad case, for treatment.

Dr. Ian D’Souza of Holy Family Hospital told the High Court on Monday that Swamy died at 1:30 pm. Keeping in mind the deteriorating condition of Swamy, the court had started the hearing immediately.

After Swamy’s death, his lawyer Mihir Desai demanded a judicial inquiry into the matter. Desai, who has been fighting Swamy’s case since his arrest, told the court that he had no complaint against the Holy Family Hospital or the High Court, but blamed the National Investigation Agency (NIA) and Taloja Central Jail for Swamy’s death.

It is reported that Swamy was denied medical care for more than ten days before being taken to Holy Family Hospital on May 30. During those 10 days, Swami complained of fever and weakness.
Taloja Central Jail, which lacks proper medical facilities, failed to provide adequate medical treatment to Swamy and by the time he was taken to the hospital his health had deteriorated.

Desai said that since then Swamy had to be admitted to the ICU several times. The hospital told the high court on Monday that Swamy died on July 4 following a cardiac arrest. Swamy was put on ventilator support and was unconscious since then. Provincial Dr. Stanislaus D’Souza SJ, a Jesuit (member of the Royal Catholic Society) of India, issued a statement after Swamy’s death, saying that he, along with all Jesuit priests, expressed condolences to the family of Swamy.

He said, ‘I express my deepest condolences to the family members, friends, lawyers, well wishers and all those who stood by Stan and prayed for him in this moment of trial and pain.’ He was arrested on October 8 last year for his alleged role in the Elgar Parishad case. Swamy was the 16th and oldest person to be imprisoned in this case.

He was suffering from Parkinson’s disease and he was also facing difficulties in drinking water from the glass. Despite this, Stan Swamy was not granted bail even after several requests on medical grounds.

Earlier, Telugu poet and activist Varavara Rao, co-accused in the case along with Swamy, was granted bail on medical grounds. There was a demand from different sections of the country to grant bail to Swamy. The National Human Rights Commission (NHRC) had also issued a notice to the Maharashtra government over a complaint received regarding Swamy’s critical health condition.
The NHRC said in a statement, “In view of the complaint alleging serious health condition of Father Stan Swamy, the NHRC has issued a notice to the Chief Secretary, Government of Maharashtra. They have been asked to ensure that every effort is made to provide them proper medical care and treatment for life saving measures and protection of basic human rights.
Earlier, the commission had advised the state government to provide adequate medical care and treatment to Swamy, who was admitted in Holy Family Hospital. In May this year, Swamy had told the vacation bench of the High Court through video conference that his health continued to deteriorate in Taloja jail.

He had requested the High Court to grant interim bail at that time and said that if things continued like this there he would “die very soon”.

In the last one year, several petitions and complaints have been filed against the authorities of Taloja jail, especially its superintendent, Kaustubh Kurlekar. However, the state government did not take any action on these complaints till last week, when Kurlekar was released from Taloja jail. After Swamy fell ill in May, his lawyer Mihir Desai made another application before the high court, this time challenging the constitutionality of the UAPA.

Desai has challenged the constitutionality of Section 43D (5) of the UAPA, which imposes strict conditions for grant of bail. The bail application has claimed that the UAPA section violates Articles 14, 19 and 21 of the Indian Constitution. The matter is to be heard again on July 6.

In his petition filed through advocate Desai, Swamy has said that this section creates hurdles in the direction of getting bail and thus it is in violation of the fundamental right to life and liberty of a person guaranteed by the Constitution. In the Elgar-Parishad case, Swamy and his co-accused have been accused by the NIA of working on behalf of the banned CPI(M).
Last month, the NIA had opposed Swamy’s bail plea by filing an affidavit before the high court. It had said that there was no ‘concrete evidence’ of his illness.He had alleged that Swamy had supported the Maoists, who had hatched a conspiracy to create unrest in the country.
The Elgar Parishad case pertains to alleged provocative speeches at a conference in Pune on December 31, 2017, which police claimed led to violence near the Koregaon-Bhima War Memorial the next day.

(Based on different media sources)