A President like Dr. A.P.J. Abdul Kalam is rarely found in the history of the Indian Parliament. He was also a great scientist who played a leading role in strengthening India’s defense system and contributed significantly to India’s nuclear weapons and missile programme. He is also referred to as the “Missile Man of India” in his missile program. Today, through this blog, we will study about the early childhood, education, career, awards etc. related to the life struggle of Kalam Sahib. 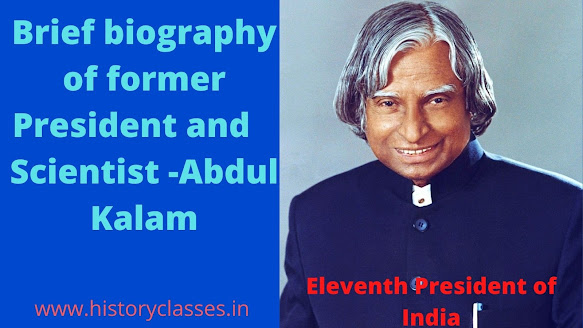 Dr. A. P. J. Abdul Kalam Kalam was born on 15 October 1931 in a Muslim family. He was born in a Tamil Muslim family in Rameswaram, Tamil Nadu. His family was poor and father Jainulabdeen worked as a sailor. Asima was his mother who was a housewife. They were five siblings in Kalam’s family, three elder brothers and one elder sister. Thus Kalam Sahib was the youngest member of his family.
Asim Zohra was his eldest sister. Apart from this, he had three elder brothers named respectively – Qasim Muhammad, Mustafa Kamal, Muhammad Muthu Meera Lebai Marikyar.
The ancestors of Dr. APJ Abdul Kalam were wealthy merchants and landlords during the British period. Their ancestors traded groceries from Sri Lanka between the mainland and the island, and ferry pilgrims from the mainland to Pamban Island. Due to which his family came to be known as “Mara Kalam Laykkivar (meaning wooden boatman) and later as “Marakiar”.

By the time he reached the 1920s, his family’s ancestral work had lagged behind and by the time Abdul Kalam was born, his family was living their life in poverty. With the aim of helping his family, Kalam started working since childhood and he started selling newspapers.
His early education took place in the same school in the village. During his school days, Kalam sahib was an average student but he was always eager to learn new things. Mathematics was his favorite subject. He was always ready to learn, so he used to study for hours.

Abdul Kalam’s early teacher was Iyadurai Solomon, but his teacher told him that “To achieve success and favorable results in life, one must understand and conquer these three forces of intense desire, faith, expectation. When he When we were in the fifth grade, one day the teacher was teaching about flying birds in the class, but when the students did not understand, the teacher took them to the beach where they explained them well by showing them flying birds. The inspiration to go into the field of science arose in Sahib’s mind.Kalam Sahib used to pick up at four o’clock in the morning and go to study tuition from his maths teacher.

Kalam Saheb completed his matriculation from Schwartz Higher Secondary School, Ramanathapuram, Tamil Nadu. After matriculation, Kalam joined St. Joseph’s College from where he graduated in Physics in 1954. He moved to Madras in 1955 and studied aerospace engineering from Madras Institute of Technology. His dream was to become a fighter pilot, but he secured ninth position in the examination, while the IAF had declared only eight results. So he could not succeed in that.

As a scientist, Dr. A. P.J. Achievements of Abdul Kalam

Dr. A. P.J. Abdul Kalam joined the Indian Institute of Defense Research and Development to work on the Hovercraft project after completing his graduation. In 1962 he joined the ‘Indian Space Research Organization’ where he played a notable role in several satellite launch projects. In July 1962, Rohini was successful in launching the satellite.
Abdul Kalam received the credit of making India’s first indigenous satellite (SLV III) orbiter as Project Director General in the Indian Space Research Organization. The credit for taking forward the ISRO launch vehicle program also goes to Abdul Kalam.
Abdul Kalam designed the indigenously designed guided missile. By them, the missiles like Agni and Prithvi were made with indigenous technology.

He was honored with several prestigious awards, including the “Bharat Ratna”, India’s highest civilian honour, in 1997.

From 1992 to 1999, he was the Science Adviser to the Defense Minister and Secretary, Department of Security Research and Development. They used the strategic ballistics system as firearms. Similarly, for the second time in Pokhran, nuclear test was also done by mixing it with nuclear energy. Kalam sahib’s main contribution was in making India powerful in the form of nuclear weapons. It was under the supervision of Kalam sahib, India conducted its second nuclear test in Pokhran in 1998 and India thus joined the ranks of nuclear-armed nations.

Did you know that in 1998, Abdul Kalam ji along with cardiologist Dr. Soma Raju developed a low cost coronary stent? Which was later named as “Kalam-Raju Stent”. Apart from this, both these people also designed tablet PC for health care in rural areas which was named “Kalam-Raju Tablet”.

On 10 June 2002, the National Democratic Alliance (NDA) government elected Dr. A.P.J. Abdul Kalam’s name was proposed to the Leader of the Opposition, Congress President Sonia Gandhi.
He was the first single and scientist to live in Rashtrapati Bhavan. as president of india 2002-2007

– Do you know that he got around 922,884 votes in the presidential election and won the election by defeating Lakshmi Sehgal of the opposition?

He was the third President of India to receive the Bharat Ratna, the highest civilian award. Prior to this, Dr. Sarvepalli Radhakrishnan was conferred this honor in the year 1954 and Dr. Zakir Hussain in the year 1963.

According to him, the most difficult decision taken by him as President was to sign the bill of Office of Profit.

However, he was also criticized as a President for his inaction to decide the fate of the mercy petitions of 20 out of 21 people, including Afzal Guru, a Kashmiri terrorist who was convicted for the December 2001 Parliament attacks I went.

1981, the Padma Bhushan by the Government of India.

1990, was awarded the Padma Vibhushan.

1997, was awarded the highest civilian award like Bharat Ratna.

1998, was awarded the Veer Savarkar Award.

2008, he was awarded the Doctor of Engineering (Honoris Causa) degree from Nanyang Technical University, Singapore.

2009, awarded the Hoover Medal by the ASME Foundation of America
In 2010, the University of Waterloo honored Dr. Kalam with a Doctor of Engineering.

In the year 2011, Abdul Kalam became an honorary member of IEEE.
In 2013, he was awarded the Von Braun Prize by the National Space Society.

2014, he was awarded the Doctor of Science degree by the University of Edinburgh, UK.

After the death of Dr. Kalam, 15 October which is his birthday was announced by the Tamil Nadu government as Youth Renaissance Day across the state. In addition, the state government instituted the “Dr APJ Abdul Kalam Award” in his name. Under this award, a gold medal of 8 grams and cash of Rs 5 lakh is given. This award is given to those people who work in promoting scientific development, humanities and welfare of students.

Not only this, on October 15, 2015, on the 84th anniversary of the birth of Dr. Kalam, Prime Minister of India, Narendra Modi also released a postage stamp in memory of Dr. Kalam at DRDO Bhawan in New Delhi.

(2004) The Luminous Sparks: A Biography in Verse and Colors

2011-You Are Born to Blossom: Take My Journey Beyond (Co-Writer: Arun Tiwari)

2013- My Journey: Transforming Dreams into Actions

2014-Forge Your Future: Candid, Forthright, Inspiring 2014Beyond 2020 -A Vision for Tomorrow’s India2014 Governance for Growth in India

On 27 July 2015, Dr. A.P.J. Abdul Kalam was delivering a lecture at IIM Shillong, where he suffered a heart attack and his condition became critical, therefore, he was shifted to Bethany Hospital, where he later died of a cardiac arrest. His last words to Shrijan Pal Singh were “Funny guy! Are you doing well?”

On 30 July 2015, Dr. A.P.J. Abdul Kalam’s last rites took place near his ancestral village Rameshwaram. Did you know that around 350,000 people attended Kalam’s funeral rites, including the Prime Minister of India, the Governor of Tamil Nadu and the Chief Ministers of Karnataka, Kerala and Andhra Pradesh?

Whenever there will be discussion of great people in India, Abdul Kalam’s name will be kept in the highest category. As high as his marriage was, his contribution as a scientist was supreme. He is the person most remembered as President. His greatness is cherished in every Indian heart. The whole world is convinced of his scientific talent. It was because of Abdul Kalam’s contribution that India became a nuclear power country. We are proud of our late great scientist and President Dr. A. P.J. abdul kalam on.