How did the last days of Hitler’s life pass

We are well acquainted with the name of Adolf Hitler, the German dictator and responsible for World War II. Hitler killed millions of Jews and the disabled in his torture house in Germany as a military dictator in his life. Can we imagine the life of a cruelest dictator ended in a cowardly way. How was he in the last days of his life? How did he end his life? Today in this blog we will know the secrets of the last days of Hitler’s life, which very few people know. 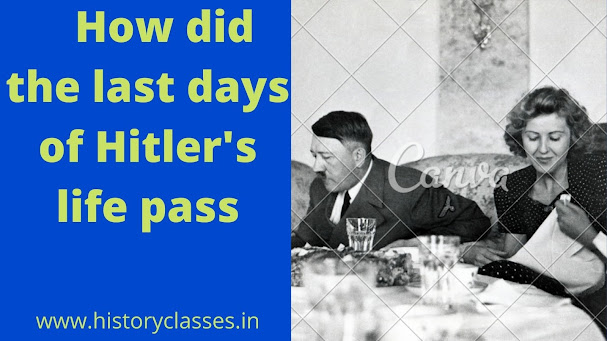 From 25 April 1945 onwards, Hitler had only one purpose in life – to arrange his own death.

On 25 April itself, he called his personal bodyguard Heinz Linge and said, “As soon as I shoot myself, you take my dead body to the Chancellery’s garden and set it on fire. After my death no one will see me.” And didn’t recognize it. Then you go back to my room and collect my uniform, paper and everything that I used, and come out and set it on fire. Only oil paintings of Frederick Mahan made by Anton Graf I don’t have to touch you, which my driver will safely take out of Berlin after my death.”

Talking about Hitler’s last days, he worked and slept in a bunker built 50 feet below the ground in the last days of his life. He would occasionally visit the Chancellery’s garden just to visit his beloved pet bitch, Blondie, where the ruins of buildings destroyed by bombs lay all around.

Who was with Hitler at the last moment

Hitler used to go to sleep at five or six in the morning and wake up around noon. Hitler’s personal secretary, Trudi Junga, was with Hitler in that bunker until his last moments.

Talking to the BBC once, he said, “The last ten days were really like a nightmare for us. We were hiding in the bunker and the Russians were coming closer to us. We could hear their firing, the sound of bombs and shells.” could hear clearly.”
“Hitler waited until the last moment that someone would come and take him away. But one thing he had made clear from the very beginning that if he did not win the battle, he would never leave Berlin and die with his own hands. Clearly we were well acquainted with the final result.

“When Hitler told all of us on 22 April 1945 that you could leave Berlin if you wanted, his girlfriend Eva Braun was the first to say, ‘You know I won’t leave you and go anywhere… I’ll stay here. ‘ The same thing came out of my mouth spontaneously and automatically.”

Hitler had changed at the last time

At the same time, Hitler’s Minister of War Production, Albert Speer, came to his bunker to meet him and say goodbye to him. Speer later recalled that by then Hitler’s personality had changed a lot.
“If we talk about Hitler’s life week, then just looking at that condition, we can only pity Hitler. His whole body started shaking and his shoulders were bowed. His clothes were dirty and most of all, It was that he had a very cold attitude towards me. I had come to bid him farewell. He knew that we were meeting for the last time, but I do not remember that he had said anything to me that was touching.”

Hitler’s end-time condition is mentioned by Robert Penn, who writes in his book ‘The Life and Death of Adolf Hitler’, “Hitler’s face was completely swollen and many wrinkles were clearly visible on Hitler’s face.” Age seemed to be much more than his actual age. Life was going on in his eyes. Sometimes his right hand would tremble badly and to stop that trembling he used to take it on his own.

It was caused by damage to a fine membrane of his ear in a bomb blast. He would walk a short distance and stop and hold the corner of a table. Hitler was so upset in his last days that in six months his age was 10 years more.

During his last days in the bunker, Hitler decided that he would legitimize that relationship by marrying Eva Braun.

In his book ‘The Life and Death of Adolf Hitler’, Robert Penn writes, “The question arose as to who would get married? Goebbels thought that some Walter Wagner had married her. The problem was how to find her? A soldier was sent to the address. He was brought to Hitler’s bunker with great difficulty in the evening. But he forgot to bring the marriage certificate with him.”

Hitler married his girlfriend EvaBrown at the last minute

“He went back home to pick him up again. Wagner came back to Hitler’s bunker through rubble-laden streets amidst fierce Russian shelling. At that time the wedding party was about to begin and Hitler and Eva Braun eagerly waited for them. Hitler made Goebbels and Braun made Bormann his witness.”
Robert Penn further writes, “Hitler’s signature on the marriage certificate looked like a dead worm. Eva Brown first wanted to write her pre-wedding name as Brown. She also wrote ‘B’. But then she gave it to her.” Cut and then clearly wrote Eva Hitler Brown. Goebbels did a sign similar to a spider’s web, but before that he did not forget to put a doctor. The date on the certificate was written April 29, which was wrong, because the wedding would take place at twelve o’clock in the night It’s been 25 minutes. Law should have been written on it as April 30.”

Bormann, Goebbels, Magda Goebbels, General Krebs, General Bergdorf, Hitler’s two personal secretaries and his vegetarian cook also attended the post-wedding banquet. Everyone raised jams for the health of Eva Hitler. Eva drank a lot of champagne. Hitler also took a sip of champagne and started talking about the old days when he attended Goebbels’s wedding. Hitler’s mind turned and he suddenly said, now everything is over, I have all cheated together

Another important thing in Hitler’s life, which is related to his last, woke up early, took a bath and started walking around refreshed. It has often been seen that prisoners sentenced to death sleep peacefully the night before their death. After shaving, Hitler met his generals. He said Hitler, our last time has come, Russian forces can enter the bunker here.

Robert Penn writes, “Hitler called Professor Haase to ask whether the cyanide capsules could be trusted? It was Hitler who advised that they be tested on his beloved bitch, Blondie. After the test Haase asked Hitler to Reported, ‘The test was successful’. It didn’t take more than a few seconds for Blondie to die.”
“Hitler himself did not dare to witness this scene. After his death, Blondie and her six puppies were put in a box and brought to the Chancellery’s garden. The pups were still clinging to their mother’s breasts. Then Ote Guenshe said They were shot one by one and the box was buried in the garden itself.” 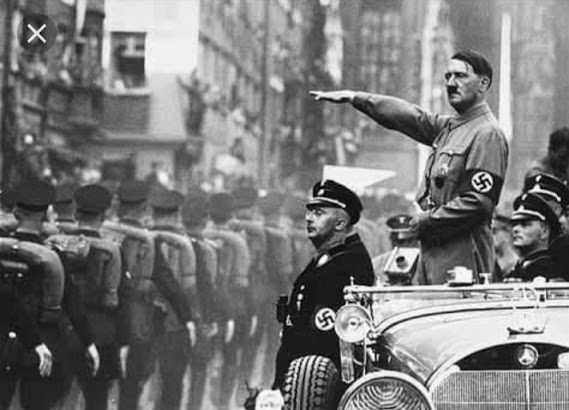 At two o’clock Hitler sat down to have his last meal. Otto Guenshe was ordered to arrange for 200 liters of petrol and fill it in jerry cans to the outer door of the bunker.
Hitler’s biographer Ian Karshan writes, “Gwensche laughed when he called Hitler’s chauffeur, Eric Campka, about it. He knew how much petrol was scarce in the Chancellery. He said, ‘Someone needs 200 liters of petrol.’ Why might it be needed?’ But Gwenche said in an orderly tone that this is not the time to laugh.. Campca arranged 180 liters of petrol with great difficulty.”

After having dinner, Hitler wished to meet his companions for the last time and went and shook hands with them, at that time his wife was also with him.

He was wearing a dark blue dress and brown Italian shoes. A platinum watch studded with diamonds was tied on his wrist. Then suddenly a noise was heard. Magda came to Goebbels’ door shouting that Hitler should not commit suicide. If she is allowed to talk to them, she can convince them not to do so.
Hitler did not meet anyone at the last moment

Gerhard Bolt writes in his book ‘In the Shelter with Hitler’, “Gwensche, Hitler’s bodyguard, was six feet two inches tall and looked exactly like a gorilla. Magda was so insisting on her point that Gwensche opened the door to Hitler’s room.” Decided to open it. The door was not locked from inside. Gwensche asked Hitler if you would like to meet Magda? Eva had no clue. Maybe she was in the bathroom because the sound of running water was coming from inside. Hitler He turned and said, ‘I don’t want to meet anyone.’ After that he closed the door.”
Heinz Linge, standing right outside the door, did not know when Hitler shot himself. He got the first impression of it when there was a slight smell of gunpowder in his nose. Rokus Misch was a telephone operator in Hitler’s bunker.

A few years ago, he said while talking to the BBC, “Suddenly I heard someone shouting to Hitler’s attendant, ‘Linge! Linge! Maybe Hitler is no more.’ Maybe they heard the sound of bullets, but I did not hear any sound. At the same time Hitler’s personal secretary Bormann told everyone to shut up.”

“Everyone was talking in a whisper. Then Bormann ordered the door to Hitler’s room to be opened. I saw Hitler’s head rolled on the table. Eva Braun was lying on the sofa with her knees bent to her chest. She was wearing a dark blue dress with a white frill. She probably spread her hand while dying, due to which the bouquet of flowers kept there fell. I can never forget this scene. “
The Truth of Hel Hitler…

Linge then wrapped Hitler’s body in a blanket and brought it to the Chancellery’s garden above the emergency door. Borman picked up Eva Brown’s body in his hands.

Rokus Misch recalls, “When he passed Hitler’s body from me, his legs were hanging down. Somebody shouted to me, ‘Come up quickly. Those guys are burning the boss. But I’m up did not go.”
Hitler’s biographer Ian Karshaun writes, “This scene was watched by all of Hitler’s comrades from the bunker door. As their bodies were set on fire, everyone raised their hands and said ‘Hail Hitler’ and returned to the bunker.” returned.

At 11 o’clock in the night, Guenshe sent SS soldiers to bury those burnt bodies. All was over when Soviet investigators retrieved the remains of Hitler and his wife a few days later. A dental bridge was definitely found there. A man who worked for Hitler’s dentist since 1938 confirmed that the dental bridge belonged to Hitler.”