Who was JRD Tata

On hearing the name of Jehangir Ratanji Dadabhai Tata i.e. JRD or ‘Jeh’, a picture of such a person would emerge in your mind who was the first commercial pilot of the country, with whom the story of the formation of Air India is associated, who founded the Tata Engineering and Locomotive Company. (Telco) and which transferred all its assets to Tata Sons. This chairman of Tata Sons had to suffer many times due to his principles. Tata Industrial Institute does not need any introduction, the business of Tata Group is spread in the country and abroad. We are all familiar with Tata products be it Tata Tea or Tata Motors. Who was JRD Tata who took this great industrial organization to the pinnacle of success? The credit of bringing India into the arena of the aircraft industry goes to JRD Tata. Apart from this, there are many such achievements which are associated with the name of JRD Tata, former chairman of Tata Industrial Institute. So let’s know about the great personality whom the world knows as JRD Tata.

Who was JRD Tata 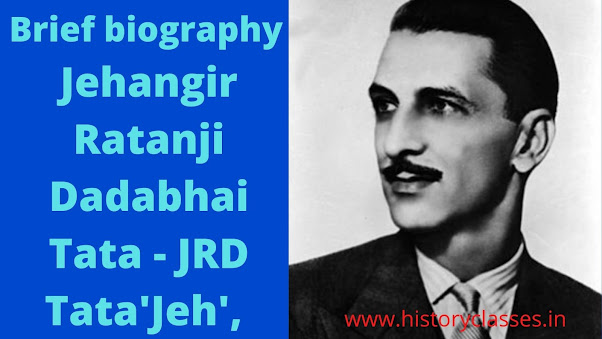 JRD Tata was born on 29 July 1904 in Paris, the capital of France. His father’s name was Ratan ji Dadabhai Tata. His mother’s name was Suzanne Briere. Suzanne Briere was a French citizen. JRD was the second child of his parents. Jamshedji Tata, the cousin of his father and the founder of the Tata Company, was a leading industrialist. JRD’s mother, who was a French citizen, naturally spent most of his time with his mother in France, making JRD’s language French. The full name of JRD is Jehangir Ratanji Dadabhai Tata. JRD’s friends used to call him ‘Jeh’.

JRD Tata did his early education from the Cathedral and John Connon School, Mumbai. After completing his schooling, he went to Cambridge University (UK) to study engineering. As a French citizen, he also received one year of compulsory military training in the French Army. He wanted to remain in the French army but his father did not allow him, so he had to leave the army.

Who was the founder of Tata company?

The founder of Tata Company was Jamshedji Tata who founded this company in Mumbai in 1868. In the beginning, Jamsetji was considered a small trader who used to trade in cotton. He opened a cotton mill in Nagpur with the aim of establishing the industry on a large scale and after that he gradually started expanding his business on a large scale and gave Tata the form of a company.

JRD entered the Tata group in 1925 as an unpaid apprentice. He made his important place in the Tata company with his hard work and dedication. His hard work and dedication paid off when he was elected the chairman of Tata & Sons, India’s largest industrial conglomerate, in 1938. The group was an industrial conglomerate of 14 companies at the time he took over the leadership of the company. When JRD stepped down as the group’s chairman in 1988, the group had grown into a huge conglomerate of 95 enterprises. He led the company in engineering, energy, chemical, steel and motor production for several decades. JRD was not only an industrialist but he was also a man of high morals. He implemented policies related to the welfare and social security of the employees working in the Tata company. Impressed by his policies, the Government of India also gave law to those policies.
Under the chairmanship of JRD, the total assets of the Tata group increased from US$ 1 billion to US$ 5 billion. He founded Tata Computer Center (now known as Tata Consultancy Services) in 1986 and Tata Steel in 1979.

JRD Tata was a pioneer in the aviation industry and other industries. It was his great achievement that the first pilot in India was licensed to JRD Tata (10 February 1929).
Establishment of Tata Airlines
In 1932, JRD Tata established the first commercial airline ‘Tata Airline’. In 1946, this Tata airline became India’s first government airline ‘Air India’. That is why JRD is called the father of Indian airline. In 1953, the Government of India appointed him the Chairman of Air India and the Director of the Board of Indian Airlines. He remained in this position for 25 years.

Although Mahatma Gandhi was not the Prime Minister, his relationship with JRD deserves mention. Gandhi used to give great respect to some other industrialists like Ghanshyam Das Birla and Jamnalal Bajaj ( due to which Gandhi was also accused of being a capitalist ). Bajaj’s son Kamalnayan was called Gandhi’s fourth son. The last 144 days of Gandhi’s life were spent at Birla Niwas in Delhi. But he never gave importance to JRD. In an interview, he had said that he had met Bapu only thrice.

Mahatma Gandhi vehemently opposed the delegation of some industrialists who went to England and America under the leadership of JRD in 1945. The purpose of this exercise was to outline the industrial environment in the country after independence as well as to bring some orders and machines from abroad. On May 7, 1945, Gandhi wrote in the Bombay Chronicle newspaper, ‘Tell them (the industrialists) that the leaders of the country should first be free, then go. We will get freedom only when these big industrialists give up their attachment to the pieces of Indo-British loot… The so called deputation which is thinking of going to England and America in the name of ‘Industrial Mission’, does not even dare to do so.’ JRD was stunned after reading the language and content of the article. He also replied by writing a letter, but perhaps Bapu was not satisfied.

A section believes that the reason for Gandhi’s distance from JRD cannot be due to the clash of ideologies of capitalism and socialism. Because if this was the case then other industrialists would not be close to him. Then Gandhi must have been well aware of the social work that the Tata group had started in the twentieth century. GD Babu, who gave the most funds to the Indian National Congress, has a significant contribution to independence as a businessman. At the same time, Ratan Tata, the second son of Jamsetji Tata, gave Rs 1,25,000 for Gandhi’s anti-apartheid movement in South Africa, which was also mentioned by Gandhi himself.

A possible indication of the reason for this distance is in an excerpt from a speech by JRD recorded in SA Sabawala and Rusi M Lala’s book, Keynote. He says, ‘The idea of ​​joining the Congress party came when I was young. But when I saw that I would have to go to jail as a leader, I would not be able to do anything special by keeping there, nor would I be able to get used to jail life, so I decided to serve the country through industry.’ On the other hand, GD Babu and Bajaj was immersed in the political movement for independence. It may also be that Gandhiji did not like the English way of JRD.

After independence, JRD never had a relationship with Rajiv Gandhi as with Jawaharlal Nehru. JRD Tata was also sorry about this. But the reason for this regret was not connected with any personal gain, he also criticized Indira Gandhi’s imposition of emergency.

Jawaharlal Nehru never consulted him on economic matters. In an interview, JRD had told that whenever he used to talk on economic issues, Nehru would ignore him and look out the window.

The country’s first economic blueprint ‘Bombay Plan’ under the chairmanship of JRD was rejected by Nehru. In this, all the industrialists had talked about setting up big industries in the country by the government. There was a difference of opinion between the two regarding the nationalization of Air India. JRD did not want Air India to be run by the government. Ultimately, Nehru won.

Awards and Honors of JRD Tata

JRD Tata was honored for his works by various government and non-government organizations, whose details are as follows:
1- Awarded the honorary rank of Group Captain by the Indian Air Force, Air Vice Marshal on 1 April 1974.
Tony Janes Award in March 1979.
3- In 1994, awarded the Gold Air Medal by the Federation Aeronautic International.
4- In 1986, the International Civil Aviation Organization of Canada gave the ‘Edward Warner Award’.
5- Received ‘Daniel Guggenheim Award’ in 1988
6- In 1955 Padma Vibhushan was given by the Government of India.
7- In 1992, JRD Tata was awarded India’s highest civilian honor ‘Bharat Ratna’.

JRD Tata was admitted to Geneva for treatment due to kidney infection. Where he died on 29 November 1993 at the age of 89. This was the first time that the proceedings of the Indian Parliament were adjourned on the death of an industrialist. JRD Tata is buried in the cemetery of Pere Lechsé, Paris

Who is the present owner of Tata Group